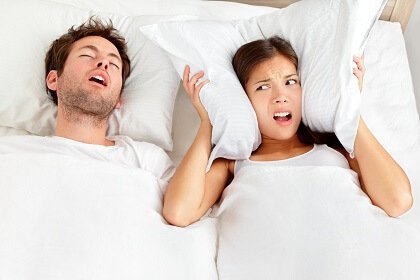 Sleep apnea is a condition that affects millions of people. It’s characterized by pauses in breathing during sleep that lasts as long as 10 seconds and occurs at least 10 times per hour, on average.

According to the American Sleep Association, sleep apnea is a disorder that causes people to stop breathing during their sleep. It’s caused by structural problems in the upper airway. The most common symptoms of sleep apnea are loud snoring and frequent awakenings during the night.

If you have sleep apnea, you’ll usually wake up feeling tired, but then find yourself drowsy again quickly upon waking. This can make it hard to fall asleep again. You may also be waking up feeling refreshed, only to have trouble falling back asleep until morning.

The most common form of sleep apnea is obstructive sleep apnea (OSA). In OSA, the airway collapses while you’re asleep and prevents air from traveling to your lungs. The lack of oxygen can lead to insomnia, fatigue, and other symptoms associated with OSA.

Sleep apnea can be caused by many factors, including obesity and pregnancy. But it can also be a result of another condition: throat surgery, which can make it difficult for you to breathe as you sleep.

What do the symptoms of sleep apnea look like? You may feel sleepy during the day, but after you wake up your body feels tired. You might also snore loudly or stop breathing for short periods of time during the night. Or perhaps you wake up frequently throughout the night and have trouble falling back asleep. If you have night sweats, high blood pressure, or memory problems, it might be a sign as well. If you’re experiencing any of these symptoms, it could be a sign that you have sleep apnea.

How Dentistry Can Help

While there are many different ways to treat sleep apnea, dentistry can play an important role in your treatment. Dentists can diagnose sleep apnea by doing a physical exam and asking questions about your sleep behavior. If they find that you have symptoms that suggest it’s possible that you have sleep apnea, they’ll refer you to an ear, nose, and throat doctor for more tests.

The good news is that there are many effective treatments for sleep apnea that do not involve surgery. The most common options include:

In addition to treating sleep apnea with dentistry treatments like dental implants or oral appliances, your dentist may also recommend other treatment options for those who have severe cases of the disorder. These include surgery, medication, or even just lifestyle changes like losing weight. These things will depend on your individual situation. It’s important to talk with your doctor and dentist about which treatment option works best for you!

Make an appointment with Sun City Dental in El Paso to discuss your sleeping problems with our dentist.